The big issue: Robochef at a caterer near you

Robots have moved from the realms of sci-fi and are hard at work in at least two UK-based contract catering operations, as Jane Renton discovers...

Robots may not yet be coming for your job but they are currently proving to be useful co-workers, as the contract catering sector mobilises for the long march back to something hopefully approaching full working in a landscape where labour and skill shortages are endemic. And robots, of course, won’t gossip in the corridors, or demand endless cups of tea or a pay rise.

They are already deployed in healthcare, where machines are not yet humanoid, but nevertheless possess unnervingly smiley faces as they deliver supplies to nurses and support staff. Robots have been used for a number of years in operating theatres, providing a clinical precision that is unmatched by humans. The much-hyped fourth industrial revolution is increasingly being driven by AI and robotics, as well as the interconnectivity of software and hardware devices.

The contract catering sector hasn’t exactly been idle on that front either. As many operators will testify, the industry has relied on technology to improve payment systems, customer ordering, and data gathering and analytics. Smart technology is already part of high-tech ovens, dishwashers and other kitchen preparation gadgets and food processors.

But now two caterers are taking things further. Mount Charles is extending and honing its own version of unmanned retail stores on more remote catering sites, as well as a more sophisticated version of micro-markets, with elements of robotic technology being included. The other is Atalian Servest, which is already deploying a ground-breaking robotic system devised by London start-up Karakuri, maker of the world’s first automated canteen, to supply customers with personalised made-to-order healthy convenience meals.

The system created by Karakuri is believed to be the most advanced of its type in the world, and for the past three months it has been in active service with Atalian Servest on behalf of client, Ocado – one of Karakuri’s main investor –  at its head office canteen in Hatfield. The DK-One, or Semblr, as the robot is known on site, involves robotic arms that essentially plate up to 17 different ingredients that can be ordered in combination through an app to make up any customer’s desired order. They are based on dishes, designed and prepared by real people – Atalian Servest’s chefs – but allow for a degree of customisation that simply wouldn’t be possible in most restaurant settings, let alone a bustling workplace one.

Various proteins, which could include chicken, beef, pork or tofu, along with a selection of vegetables, toppings and condiments are all loaded into specific dispensers within the robot and will be held at exactly the right temperatures. When an order comes through via the app, one of Semblr’s robotic arms will place a bowl under the right dispenser and the customer arrives at their allotted time slot to pick up their meal. But it is not just the ability to handle increasingly complex diets that makes this innovation so interesting. The fact is that it also offers the potential to reduce food waste, tackle labour shortages and cut a swathe through peak time service. “It doesn’t matter how many staff you put on, getting through the lunchtime queues can be stressful,” says Chris Ince, chef director of Servest Atalian. “We aim to eventually serve up to a 120 bowls an hour.”

The new robot server, which entered into service in September, has already generated what Ince describes as “great feedback”. It has not only delighted gym aficionados, obsessed by nutritional and calorie intake precision, but others who are simply fascinated by the machine’s futuristic ingenuity. Many have adopted healthier dietary habits as a result. It has also been a boon to those with food allergies, as the robot links directly to Atalian Servest’s own food supply chain, giving complete visibility on ingredients and potential allergens, eliminating human risk. 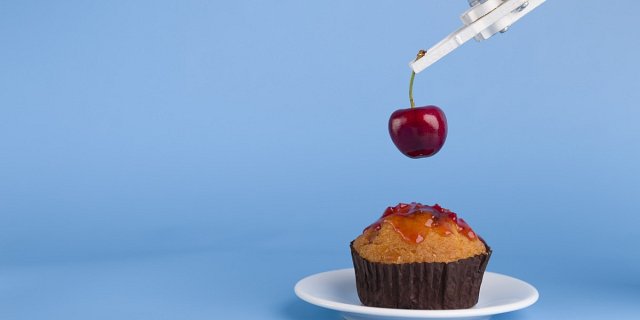 There is also the issue of portion size. Semblr never gets its measurements or weights wrong, unlike the warm-hearted human server who likes to ladle out larger helpings as profit margins diminish. And the data the machine generates makes forecasting demand so much easier.

Across the sea in Northern Ireland, Mount Charles has embraced new technology as a means of meeting current and post-pandemic challenges. Clients are struggling in some cases to re-open their catering services owing to reduced footfall. And while Mount Charles believes it is lucky to have relatively few job vacancies currently, it is acutely aware of its industry’s labour and skill shortages. “It’s no secret that there was, and will continue to be, a huge skill shortage across the industry for quite some time,” says Gavin Annon, sales and marketing director for Mount Charles.

While Annon maintains that foodservice will continue to remain “a people business”, his company has instituted a series of unmanned retail corner stores,  where customers can purchase cold drinks, hot beverages and light snacks through a self-pay system, similar to that now used by most supermarkets. The idea, though not new and introduced by Compass on some of its sites several years back, is ideal for remote or multiple sites where a full catering operation would be economically unviable. However, the technology has progressed considerably during the Covid period.

“I’m not sure the world was ready for this a few years back,” opines Annon. “It was seen then as a way of replacing people and a step too far for a contract catering environment. But the world has changed very quickly with the need for social distancing.”

As Annon observes, it is now a very good way of running a 24/7 operation on an otherwise uneconomic catering site. Demand for this unattended retail/micro service, which in some sense is a more sophisticated version of traditional vending, has exploded.

But Mount Charles is not solely relying on this add-on service, it is implementing and refining an even more sophisticated variant and one that is arousing strong interest in professional services, such as law firms, where lawyers often find themselves working late into the night and in need of proper sustenance. Again, it involves a more high-tech ‘vending’ solution, but one capable of offering hot and cold meals prepared on site by Mount Charles’ chefs and held at exactly the right temperature to meet all health and safety, as well as taste, requirements. The machine takes payment for the goods selected before the doors open for release and the purchaser simply removes the dish to heat it up on-site with equipment that does not necessarily involve microwaves.

This hybrid model offers some of the same elements as the unmanned retail corner shop, but also, Annon believes, a far more bespoke service to customers than the move to a central production unit (CPU) model that is being deployed by some of its larger competitors. “We’re not talking about regenerated meals delivered to various sites, but meals tailored to local requirements and made on site by our chef managers,” maintains Annon.  “That is so much better than delivering in meals from a CPU for 40 or so different locations. Our approach gives us a competitive edge.”

This ultra-sophisticated machine will allow night-time staff to experience the same high level of quality that they would experience during the daytime manned operation. This alternative service is now also on display at the company’s head office in Belfast and is already attracting considerable interest from existing and potential clients.

Interestingly, however, Annon does not envisage robotics and AI replacing human jobs any time soon, nor does he regard that as a desirable outcome. Such technology remains a useful adjunct to service during a time of great uncertainty, when caterers need to display an inordinate level of flexibility and agility to meet constantly changing levels of demand. “I think robotics is still very much in its infancy, and it's probably still relatively limited in what it can actually deliver,” he says. “The idea of replacing people in the kitchen is yet to come.”

Back at Atalian Servest in Hatfield, Ince sees things somewhat differently and, having been a major participant in the rollout of Semblr, he now sees the technology advancing rapidly. But he too doesn’t believe that robots will necessarily put people out of work, though they are likely to take on the more boring, repetitive tasks. “In my view, it's not really a case of,  ‘Okay, we've got labour shortages, therefore we need more robots’. It’s about pinpointing areas of development where robots can be of assistance to us.”

Evidently, Semblr could potentially lead to fewer serving staff, though Ince stresses that front-of-house employees are still in evidence, as they are needed to move food from the kitchen and into the robot’s various dispensers. He is also confident that robotics will create many new jobs. As Ince points out, there have been many revolutionary technology developments over the past decades that have revolutionised many jobs in food preparation, none of which have actually put people out of work. “The sector has just kept on growing and the human resources freed up just moved elsewhere within the industry, potentially to more creative jobs,” he says. “That’s where we are at the moment.”

Ince’s company is about to enter phase two of the three-month experiment at Ocado’s head office. Semblr has generated invaluable detail about customer preferences and buying patterns, so amendments and new dishes will be added. But this is not the end. Robots are poised to move into the kitchen in hospitals, as well as quick-service restaurant establishments where speed of delivery is of the essence. “There is lots of potential for robots to help in kitchen environments and there are lots of things we are working on,” says Amelia Jones, Karakuri’s food development director, who worked closely with Ince during the first three months of Semblr’s probation.

What both companies – Atalian Servest and Mount Charles – express is a strong desire to use technology and robotics in a way that enhances, not replaces, human performance. Both Ince and Annon independently stressed that contract catering, like the rest of hospitality, must remain a people business if it is to be successful.

25% of UK consumers happy for robots to cook